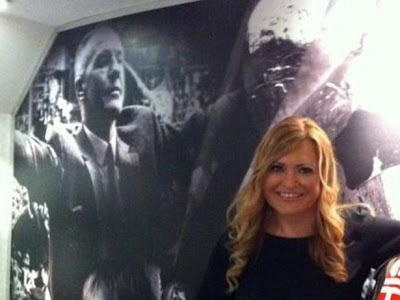 Bill Shankly's granddaughter, Karen Gill is the author of 'The Real Bill Shankly', patron for the Spirit of Shankly and AFC Liverpool and Honorary President of Liverpool Football Club Supporters Committee.
We were lucky enough to get an interview with Karen to hear about her personal memories of her grandfather and get her feedback on David Peace's Red Or Dead book, which is being launched in Liverpool on 14th August with WoW.
What are you earliest/Favourite memory of your Grandfather?
As most of the first 16 years of my life were spent growing up very close to my granddad, obviously I have so many precious memories, but the best memories are of when we stayed overnight and he would tell my sister and I stories about Glenbuck, the mines and wonderful tales about his antics with his brothers and sisters when they were young.
What inspires you most about him?
I think what inspired me and will always inspire me about him his indomitable spirit. He was a fighter and he would never give up until he had achieved his goals, but he was fair and he always respected the opponent, whoever it was.
What do you think was the most important thing he brought into Liverpool Football Club?
The most important thing he brought to LFC was his vision. He recognised that there was great potential and he never gave up until he’d realised his dream and built that famous bastion of invincibility. He was literally, the father of LFC.
Why do you think he had such a strong relationship with LFC fans and the people of Liverpool?
Because they were the same. They shared the same vision. They shared the same passion. They were a match made in heaven…the perfect partnership.
What do you think his view of the modern game would be?
He’d be appalled by the obscene wages, he’d be absolutely devastated that the simple folk, who are the backbone of the “glorious game” are being priced out of the whole match experience. Such was my granddad’s enthusiasm and passion; he would have played football and managed his team for absolutely no money whatsoever. That’s how much football meant to him and that is the devotion that is missing today.
Why do you think his legacy and reputation among all football fans has endured for so long?
I think it’s because he was honest, hard-working, fair and passionate. People respect that and the people of Liverpool, not just LFC supporters, are loyal to the people they respect and admire.
How did you feel when you heard David peace was writing a book about your Grandfather (particularly in the light of some of the controversies after the publication of The Damned United about Brian Clough’s controversial time at Leeds?)
I was so thrilled and excited. I knew what David’s intention was when writing the book and I can honestly say that I had no doubts in my mind at all that he would write the book that my granddad deserved to have written about him.
What are your thoughts on the book?
It’s epic. It’s intense and it was very emotional for me to read. I was a bit hesitant in the beginning and was worried that I may not be able to “believe” that this character was really my granddad, but I can say that it’s a very convincing portrait. Also, it’s almost a “real” experience. You actually feel as if you’re there battling alongside him and for those very reasons it’s not always easy to read, but it’s definitely worth the effort, in my opinion.
Do you think the book will have an appeal to football fans and other readers outside of Liverpool?
I really hope so, after all, the admirable qualities and wonderful deeds that he was known for went way beyond the world of football. He inspired so many people and continues to inspire even now, over 30 years after his death. I think role models like that are always appealing.
Tell us your favourite Shankly story / quote.
There are just so many of them and even though they’ve been told or quoted so many times, I do love them all. Maybe it would be more appropriate to use one of my favourite quotes from David’s book: “I want everyone to be loyal to each other. To the team and to the club. So everything we do will be for Liverpool Football Club. Not for ourselves. Not as individuals. But for the team….Because loyalty makes strength. And that strength will bring success. I promise you.”
WoW send a huge thanks to Karen for the great response and support with the David Peace event. If you want to get in touch with Karen, follow her on twitter @misshanks
The latest novel by award winning writer David peace (The Damned United, Red Riding Trilogy) hits the bookshelves on 14th August 2013. To celebrate the launch of this fascinating novel exploring the life of legendary LFC manager Bill Shankly, Writing on the Wall welcomes David Peace to Liverpool for a unique reading, book-signing and in-conversation event, hosted by journalist, writer and life-long LFC fan, Brian Reade.
Red or Dead is the story of the rise of Liverpool Football Club and Bill Shankly. And the story of the retirement of Bill Shankly. Of one man and his work. And of the man after that work. A man in two halves. Home and away.
Get your tickets tickets here
For more information visit the Writing on the Wall website.