2014 was the centenary year of the beginning of WWI. Writing on the Wall wanted to commemorate those who died in the struggle for peace and engage children from the Merseyside area to reflect on peace, war and conflict, both historical and contemporary.
'The project was designed to raise knowledge and understanding of the cause and consequences of the First World War, commemorate those on all sides who died during the conflict, and promote the cause of peace and understanding of other races and cultures, and celebrate diversity among young and old.'    Madeline Heneghan
On the 1st May WoW launched the competition at the Bluecoat. School children came together and wrote messages of peace onto doves that we threaded together and held up as we released doves into the sky. On the day we were joined by writers, Jon Mayhew, Sean Street and Cathy Cassidy and Lord Mayor, Gary Millar. The children blew us away with their messages and thoughts. 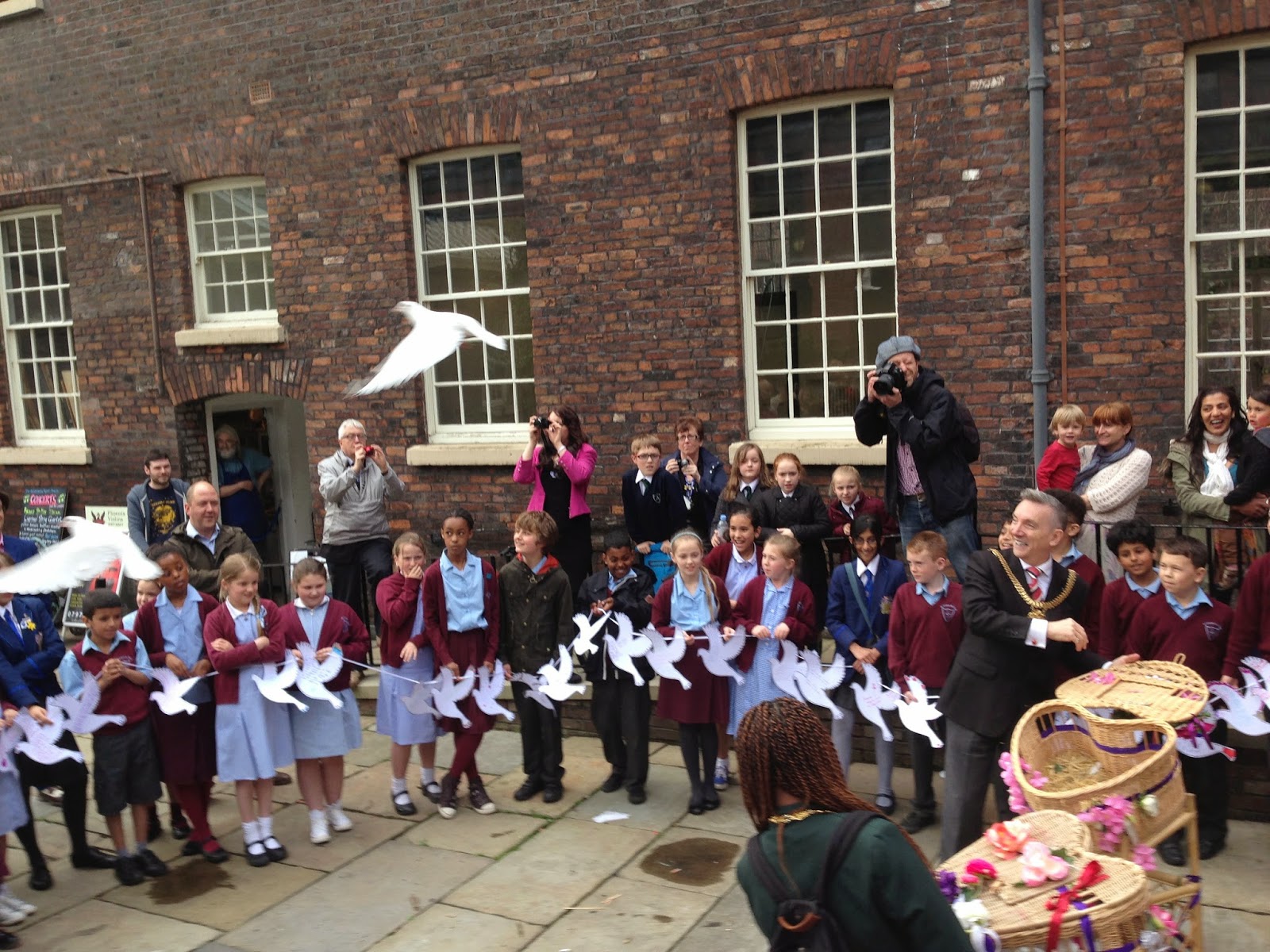 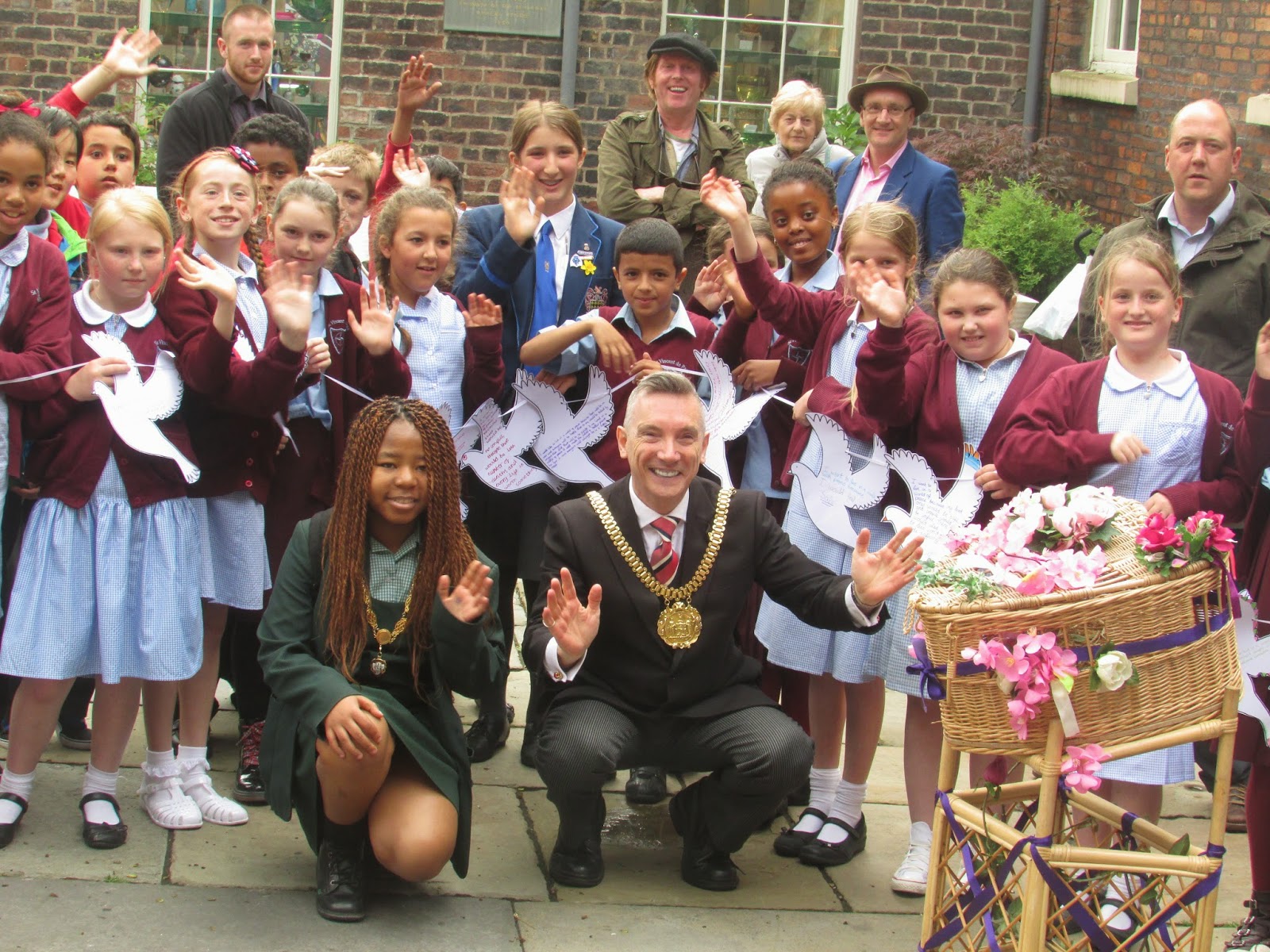 Over the following months, WoW commissioned Jon Mayhew to go into local schools and hold writing workshops. Jon worked with the young writers guiding them to complete their poetry and flash fiction entries for the competition. The entries came flooding in!
Flora and Michael from the Bluecoat School wrote about their experience of their workshop with Jon Mayhew:
' We walked into the room, with a number of other pupils already sat down and Jon Mayhew and Mrs Ludlow standing at the front. Jon started by introducing himself to the class, continuing by showing us his many fantastic books and explaining what they were about. He told us about the new campaign called ‘Make Doves not War.’ It is a children’s literary competition to commemorate world war one’s one-hundredth anniversary.During the experience we watched a short clip from the film of Michael Morpurgo’s book, War Horse. We then discussed how the poor horse would have felt and different topics we could base our flash fiction or poem on.
After we discussed this, the sheets were passed out and we all started to let our imaginations flow onto the page. We were allowed to write a flash fiction, poem or fable. Jon used his experience and story-telling ability to help us, giving hints and guidance all the way through the time that we had to write, with excitement and pleasure. We then had our books signed. It was a wonderful experience and we really enjoyed it! '
Flora Stinson and Michael Hart
7GR The Bluecoat School

Jon, Cathy and Sean came together to judge the 100+ entries and were overwhelmed by the quality of writing from the children. After a lot of deliberation they gathered the winners and finalists who were to be published. They came up with the idea of picking sentences from the pieces that didn’t make it into the book as they particularly stood out. These were added to the inside pages of the covers and decorated with the artwork from the children. We felt that this gave the book a real personal touch.
On 18th November we held a celebration event at the Central Library where we presented the children with certificates and their published work. The winning writers read out their pieces on stage, the audience were stunned. To round off the event we got the group to decorate paper doves, but this time with the message #AllTogetherNow on it. This is to tie into the Peace Collective’s single launch of the Farm’s, All Together Now. The children decorated their doves and were joined on stage by the Farm’s Peter Hooton as a surprise. Peter sang All Together Now with the schools while all the proud teachers waved profusely. We thank Jon, Sean, Gary and Peter for making it such a brilliant event and a fantastic competition.