The greatly anticipated release of James Rice's début novel, Alice and the Fly, arrived on January 15th, following an extraordinary amount of interest. Before the book launched, reviewers rushed to pronounce its acclaim. It was highlighted by Amazon for their Rising Stars list of best débuts for 2015. Far more than Maghull's new writer had anticipated, who commented that he was “overwhelmed” at the turnout for his book launch and the high praise his first book had received.

It was a scene that most new writers would not expect for their first release. Madeline Heneghan, festival director of Writing on the Wall (WoW) and host of the event, expressed surprise and delight at the crowd who had poured into Leaf on Bold Street, Liverpool. James Rice, one of the winners of the WoW's Pulp Idol 2010 competition, sat on the stage with WoW’s co-director and Pulp Idol creator, Mike Morris, looking slightly bemused at the large number of people stood around the bar and between the already fully-seated tables.

Founded in 2010, Pulp Idol is designed to address the gap in readership opportunities for new writers. Pulp Idol provides new writers with an opportunity to get their work out into the public, helping to “bridge the gap between the talented writers of North England and the publishers down in Southern England,” Mike explained. And it has definitely been the case for James Rice who, as well as being published in WoW's Pulp Idol Firsts anthology, has gone on to secure a publishing deal with Hodder and Stoughton. Rice achieved this deal with the help of his literary agent at Curtis Brown, who he met after publishing the first chapter of his début with WoW. It was a “very long process' for Rice's publication, but Rice's story of success demonstrates how competitions can be used to gain useful contacts and catch publishers” interests.

James Rice's book, Alice and the Fly, is based on a story idea he had in school. Back then, as with all drafts, it was something else entirely involving a giant spider. But, after seven years of work, Rice has finally published the finished piece as it is today. His book is a dark love story from the point of view of an obsessive teenage boy. It is written in three forms: the withdrawn diary entries that Greg (the protagonist) writes to his love interest, Alice; the frenzied bursts of Greg's stream of consciousness; and the official police reports intertwining between the other two narrative forms, which provides the novel with an added and subtle rising tension.

This last form of narrative, Rice revealed, was a late inclusion, the result of a conversation with his editor about a missing element within the story. Rice had already been toying with the idea of including police reports in the novel, but when his editor had suggested a need to create a sense of context around the slower diary chapters, he pitched his police report idea and both parties agreed on its inclusion. The police reports indicate to the reader that something serious has happened, or will happen, without actually revealing to the reader what the event is. The effect is that Alice and the Fly is a story told both forwards and backwards, with its conclusion weaved through the story.

During the book launch, Rice read from two chapters; one from a stream of consciousness narrative and the other from his first chapter, a diary narrative section. Both passages were involving and intriguing, but the first chapter was impressive from a first time writer. As all of you other writers will be aware, the first chapter, or more importantly the first paragraph in a book, has a make or break effect on the reader's interest in the rest of the story. Rice's first chapter was immersive, introducing the novel's key themes and characters within a short chapter. The setting was vivid without being exaggerated or distracting, set on a rainy bus ride where Greg sees Alice, and struggles with his crippling phobia of spiders. Greg's obsessions and fears, his outsider lifestyle and his infatuation with Alice were all revealed, set alongside distinctive side-characters that seem to have life and personalities of their own. The silent interactions between Greg and the bus driver, for example, were something you would expect from a more seasoned writer, but it was there in the first chapter of Rice's début.

Much of the success of Rice's novel has hung on his protagonist, being the first person narrator that guides the reader throughout his story. Without revealing too much, Greg's character can best be described as this: Greg is a diagnosed schizophrenic struggling to hold on to his relationship with his Nan after she moves into a nursing home, which then forces Greg to move back in with his estranged family. Her world of old movies, songs and plays, which Greg and his Nan have connected over, have become a heavy influence on Greg's perceptions of the world around him, and conflict heavily with the modern-day perspectives of his classmates and, most especially, his sister. His interactions with the people around him – inlcuding his dry, no-nonsense dealings with his counsellor and his innocent, old-fashioned, romantic obsession with Alice – strengthen Greg's characterisation and endears readers to his perspective. To Greg, Alice is “Greg's happy place,” but more than that, Greg wants to save Alice from her troubles. “He has this Hollywood-movie romantic notion that [Alice and he] are going to run off together and that it's all going to be okay.”

The book has a teen-voiced narrative and a dark sense of humour. In discussing this choice, Rice commented that the great thing about a teen-voiced narrative is that teenagers “can be cynical about the world without really understanding anything about it.” He researched teen-narrated novels by reading widely in the genre. Even so, Rice tried not to make his narrative sentimental like in many other teen-narrated books he's read, taking his research and then forming his own style of narration to avoid his novel becoming too generic.

While Rice professed to have used some autobiographical anecdotes for the basis of some of Greg's experiences – including an awkward reference to the parallel between Greg and Rice's mothers' mutual love of a white coach (which Rice's mother found hilarious) – he stressed strongly that Greg's voice was not Rice's own. Mike Morris commented on this, asking how difficult Rice found it to maintain Greg's distinctive voice when writing the novel. “It's easy,” Greg replied, “once you've written a bit, because you just reread the book and remind yourself of the character you're writing.” With Greg, he noted, the main thing about writing his character was that “[Greg's] not just the disease, he is him and the disease is just secondary to him.” While Rice researched Schizophrenia for Greg's characterisation, his primary focus in writing was not creating a “warped” perspective but writing a character who happened to have his Schizophrenic traits as an everyday part of who he is.

The evening closed with the customary Q&amp;A. Rice revealed that he was halfway through writing his next novel, which he stressed would be written linearly after the headache of editing Alice and the Fly's nonlinear “patchwork” narrative. “Instead of just fixing the patches together,” he continued to jokingly complain, “you keep cutting the patches up as you try to match them up, all without them looking bad together. The next book will definitely be linear.” Before Madeline wrapped the night up for photo opportunities and book signing, Rice expressed his personal advice to new writers. Mike and he had already highlighted four key elements a writer needed to write: imagination, determination, a lot of time and finding the time to do it. But after explaining that the lowest point in writing his début came from doubting, “What if it never gets published then what will this all be for?” – the kind of doubts that can be linked with writer's block – Rice encouraged new writers to “be aware that it takes a long time. It's hard going writing your first book, because [of how] it takes a long time and [because] you've got nothing else to show that you're a writer. Just believe you're a writer and be patient.” 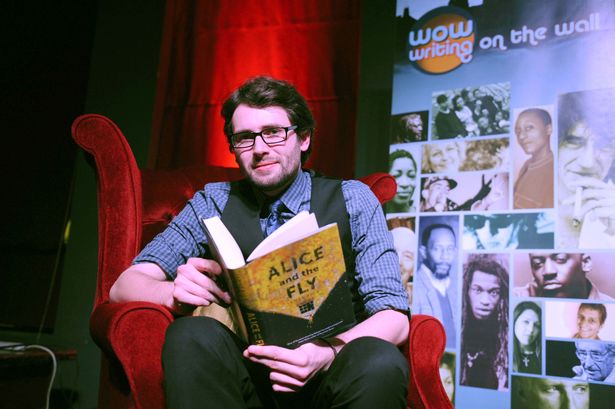 Alice and the Fly is available in hardback and Kindle editions from Amazon, Waterstones and all other bookstores. Paperback editions will be released in September.