The 12 Days of Xmas: The Stroke Association and Writing on the Wall’s Xmas Show

Some of the cast can’t walk, most of them have limited use of an arm or a leg, or both, three of them can’t speak and they all get tired very easily. Not really who you’d audition for a major performance, but then this is no ordinary cast. In fact, the opposite: they are extraordinary. They are Stroke Survivors.
Our partnership with The Merseyside Stroke Association began with a 12 week writing course, a performance and publication of a book, and continued with the writers taking part in a poetry performance during our festival in May and a big showcase of our work later in the year.
During the poetry performance held in Homebaked Anfield, me and their coordinator Kate Charles, both munching away on the freshly baked cookies created by the stroke survivors, hatched a plan for a Xmas Panto. The group were keen to continue working creatively, we wanted a new experience for them, collaborating to write and perform a show would be a progression of the work they had already developed.
As soon as we got started we quickly ditched the panto idea (insert your own joke here). Panto is one of those things that looks easy and yet is incredibly hard to get right; it’s all in the timing, apparently. Anyway, a Xmas show seemed within reach. I say that, but creating a show with a specific deadline – the clue’s in the title and no-one’s going to move Xmas back a few days because the script isn’t quite ready – is a form of madness. A deadline to deliver to a guaranteed audience of over 100 people pitted against a group who have never done anything like it before, who also, judging by their timekeeping, live by a different clock to the rest of us. It can’t possibly work, and yet it must. There’s nothing like a deadline to focus your mind, and out of this madness most often some brilliance is born.
First day, 15 people. Wow, they’re keen. Director Carl Cockram (Unity Youth Theatre Director) gets the first workshops going. Some fun exercises, lots of ideas, good writing. Three weeks in we are very pleased to welcome to the group Chris Mellor. Carl recommended Chris. Brilliant he says – can create a play in a couple of hours out of a box of scarves. Mmm, I’m hoping for a bit more. Chris’s CV speaks for itself; musical director for stage version of Willy Russell’s ‘Our Day Out’, and much, much more.
Chris puts the writing to one side and soon we are all walking round the room being told to stop and start, stare at a bean bag and look angry at each other. Round and round we go, and soon a chemistry begins to develop, an awareness of space, of sound and silence, a unity of movement.
Freeze-frame. A series of tableaux, expression through a series of snapshot images. Suddenly, for a moment, the group look like theatre. Maybe, just maybe... And the group gets bigger. Funny that, it reminds me of our Garrett project, where more people were joining towards the end of the course than at the beginning. Most courses tend to lose people.
Amidst all the ideas thrown in, one stands out as the glue that can knit the show together – a rewriting of the 12days of Xmas, stroke style:
‘On the first day of Christmas my true love gave to me, A bath seat to make me comfy.’
‘On the second day of Christmas my true love gave to me, Two rubber gloves...’
‘On the third day of Christmas my true love gave to me, three Get Well cards…’
‘On the fourth day of Christmas my true love gave to me, Four walking sticks...’
‘On the fifth day of Christmas my true love gave to me,
Five Golden Chairs
Four walking sticks
Three get well cards
Two rubber gloves
And a bath seat to make me comfy...’
You get the idea.
Brilliant. 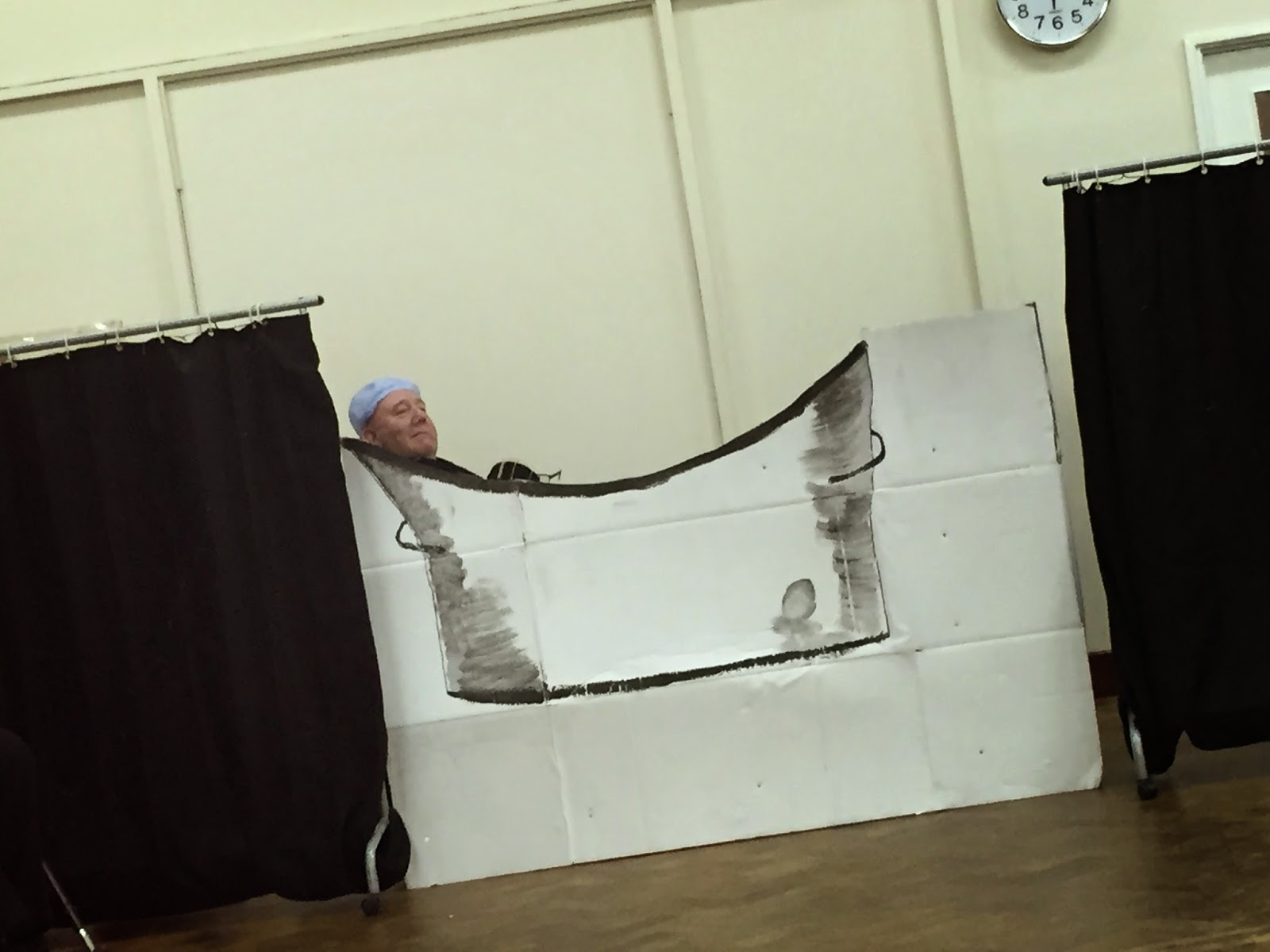 So Chris, working his backside off whilst simultaneously flying by the seat of his pants, now begins to coach the group through a series of scenes that will be performed in between each line of the song. Cue more hard work and laughter.
Pamela sends through a poem, which Chris sends to me. Between us we finally work out that the emoji’s included aren't just decoration, but are designed to be displayed as part of the poem. Very clever. Pamela is one of three in the group who, as a result of the stroke, can’t speak; they have aphasia, a condition described as ‘a communication disorder which makes it difficult to read, write or speak’, or, ‘an acquired language disorder caused by damage to the brain’, or, more pertinent, I think, as ‘a condition that affects a person's ability to communicate, not their intelligence.’ It’s not just about being unable to speak, it’s about memory and sequencing. Most clear was the frustration it brings to those who have it in trying to translate their thoughts into something others can understand. Pamela used this to create a poem during which the rest of the group joined her on stage, each using an emoji to express her feelings, and that of other stroke survivors. Wow! 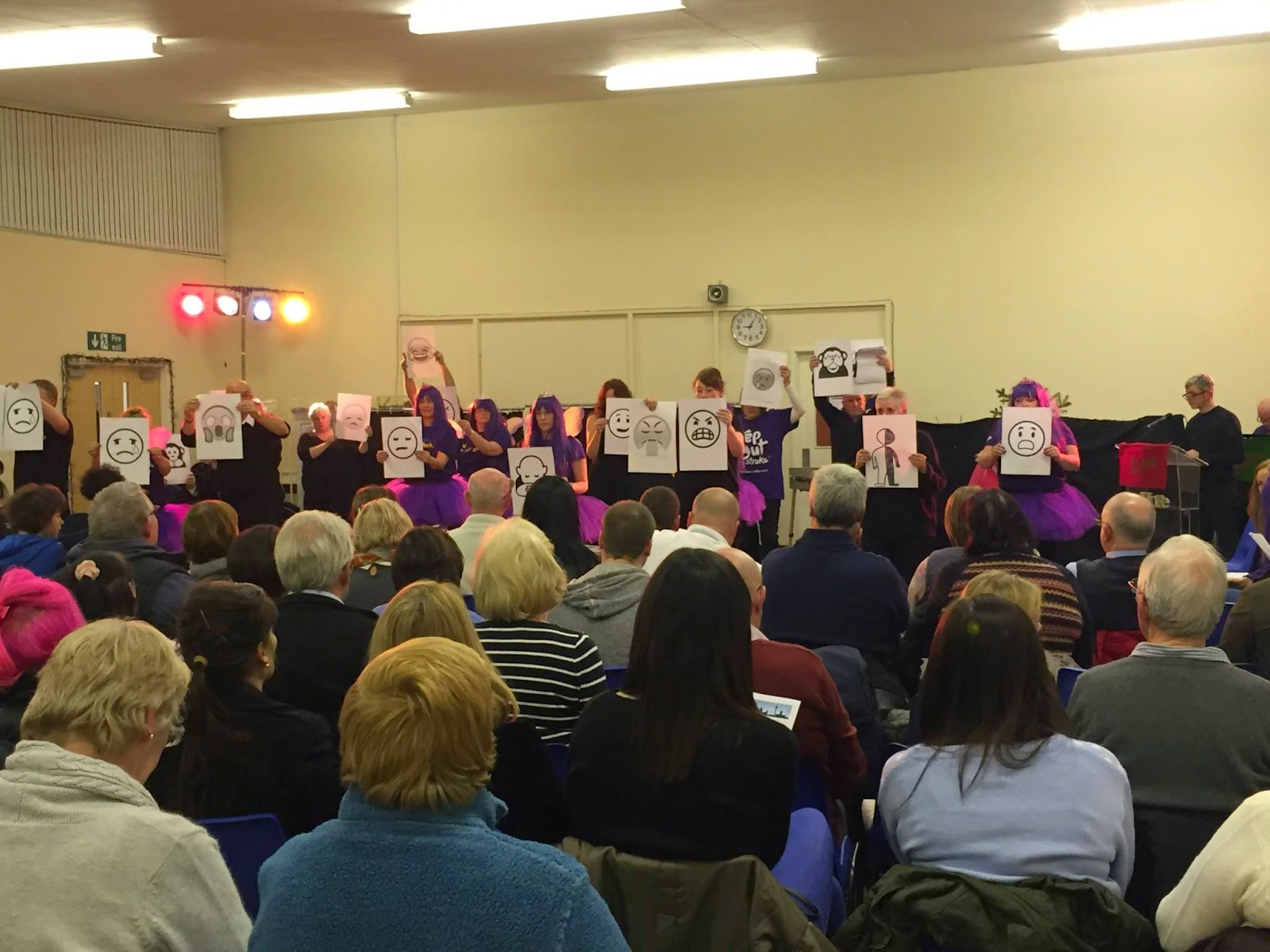 A manic day of rehearsals on the big day. Paint, tutus, coffee and biscuits. The tinkling of the piano as Barbara practiced for the final sing-along punctuated Chris’s entreaties and directions – like trying to herd cats, we thought at one point.
Break a leg, I said, to each of the performers as they trooped out from the ‘green room’ to the stage. They bore the expression of soldiers heading for the wrong end of a firing squad. The hall was packed – family, friends and public. 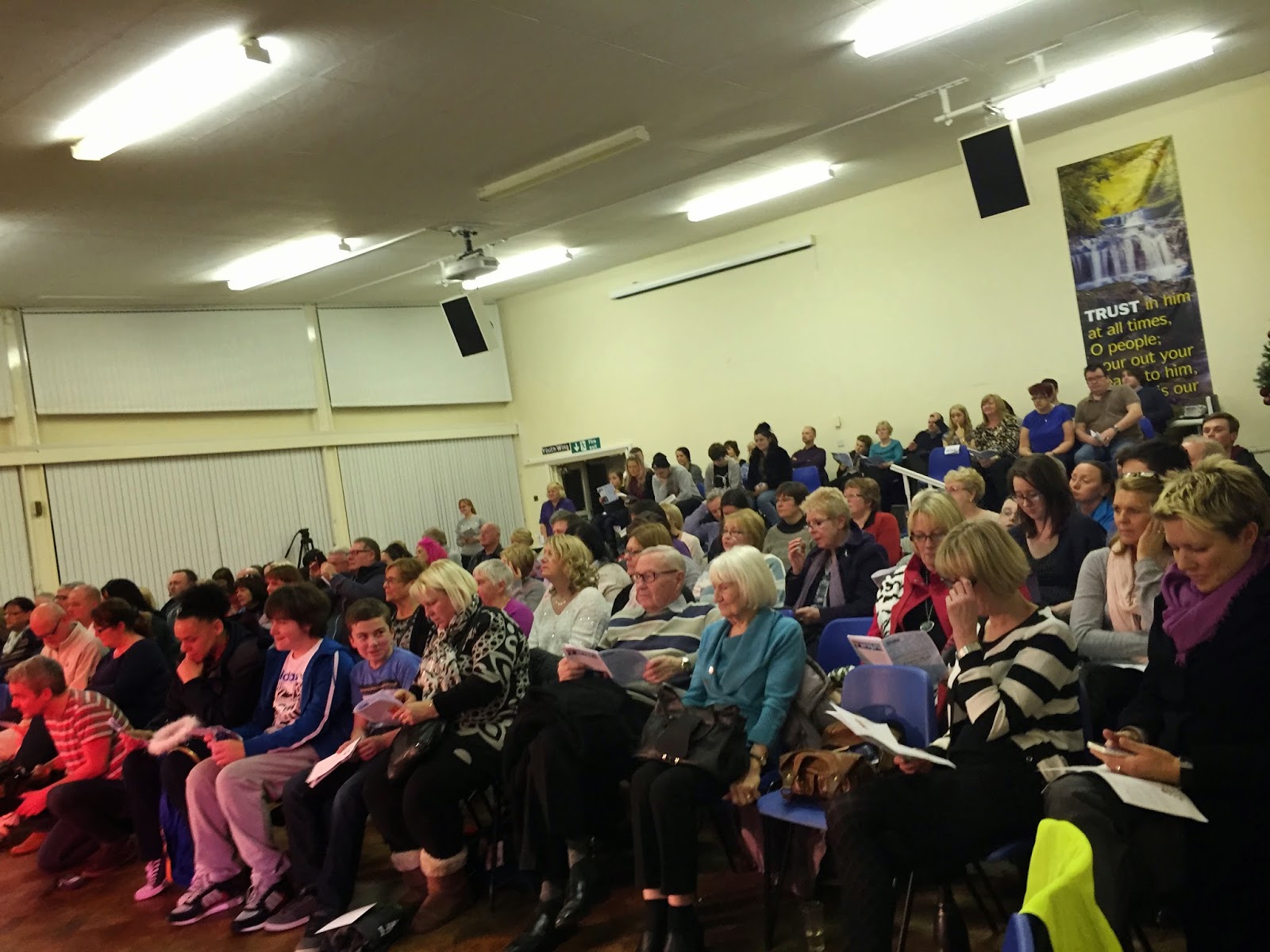 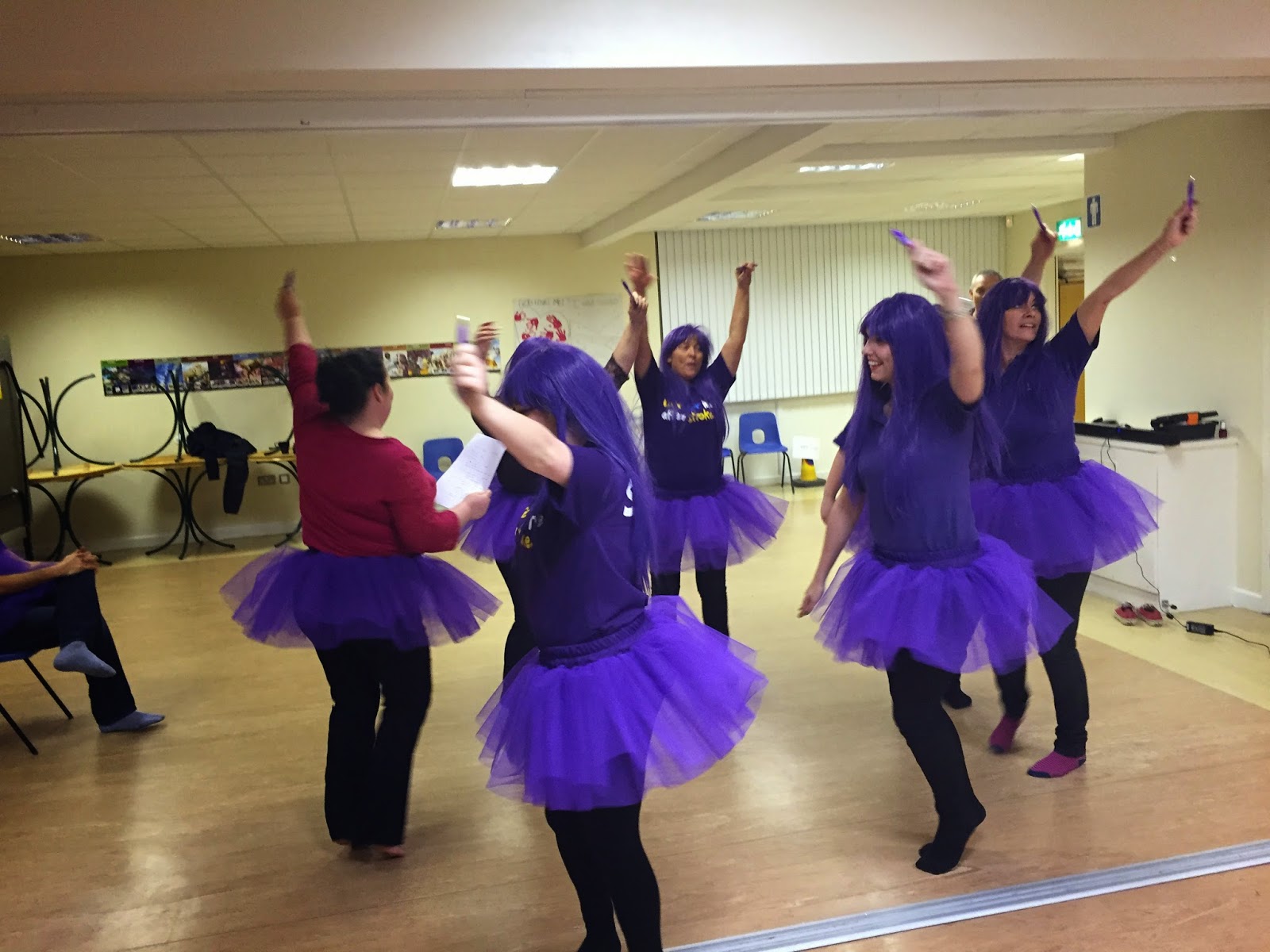 The show revolved around Bill, in his wheelchair in a day centre. The assumption from all was that Bill didn't like Xmas. The very beautiful and graceful ‘Tankerbell’, i.e. Dave Blood, waved his wand and the show began with a brilliantly funny scene featuring Bill in a ‘bathtub’ wearing a petal adorned shower cap. Bill has a naturally ability for comedy – king of the one-liner. And so the laughter began, and continued, although punctuated by many serious and moving poems and stories of the effect of a stoke, throughout each scene; Linda’s amazing ‘One Direction confession’ poem, ‘Putting On the Ritz,’ and the ever graceful staff and volunteers from The Stroke Association in the Tutus performing with the very game Chris Larkin, the Deputy Head of Operations for the North West, who, after pulling off an amazingly natural pirouette, may want to consider an alternative career in ballet. In fact, we’re not sure we did get the Tutu back from him before he left! 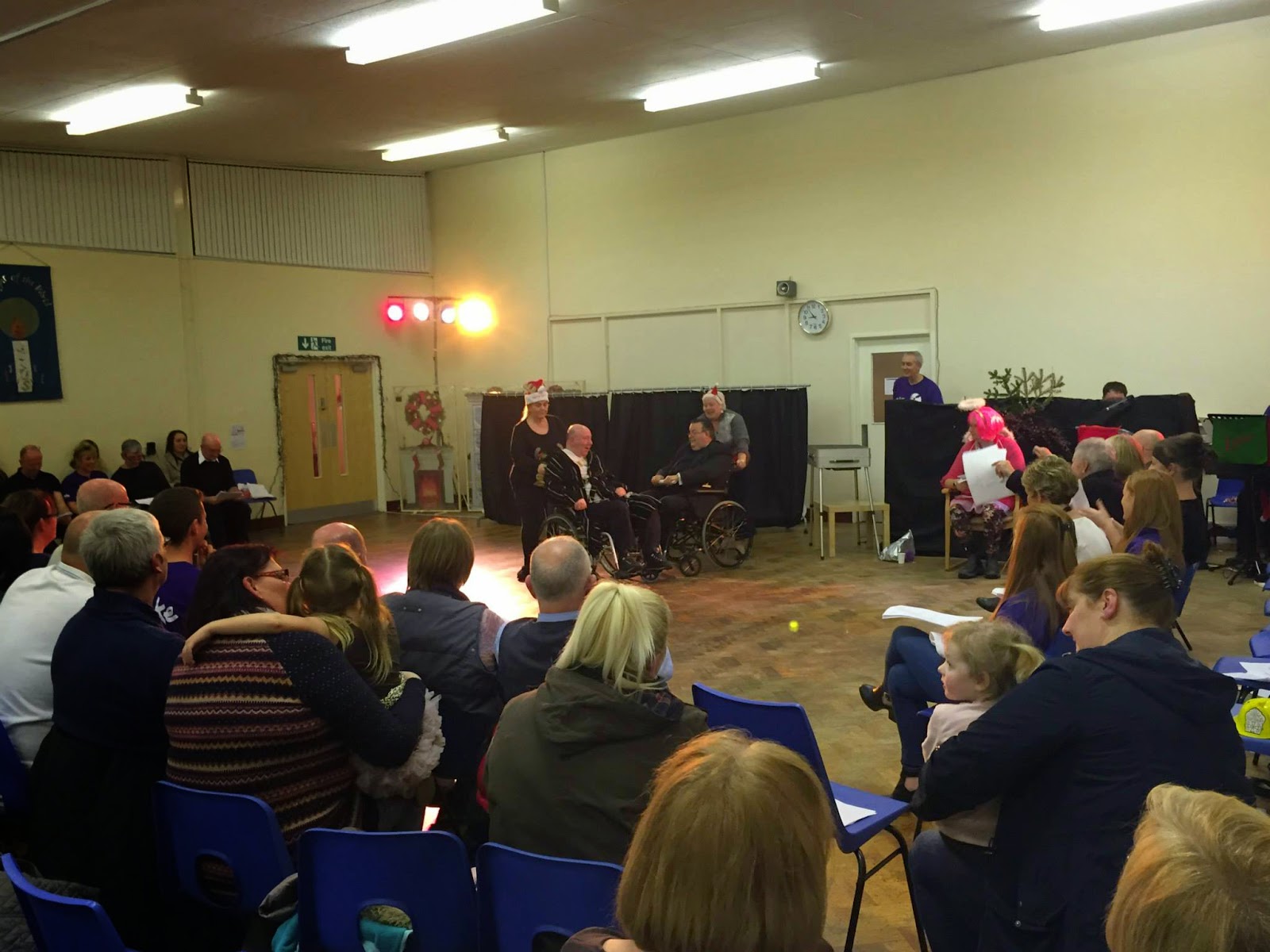 In the final scene Bill, all alone now, finally revealed his true festive nature, his wheelchair lit up with  lights, his hat all singing and dancing, and the whole cast joined him and led the hall through a series of Xmas songs. Gusto, I think would be the word for the singing. Only Chanel from WoW didn't join in – probably needed a few more drinks.
Such a performance is hard to capture on paper (Look out for the video coming soon). An achievement for any group to do, but a mountain climbed, again, by the stroke survivors. I admire them. I could see many of them, particularly the new ones to the group, were very challenged by the process, and at times had to force themselves to take each step. It’s a long journey, and not really one with a hope of full recovery at the end. But taking each step can be transformative. I loved this project. Chris did an amazing job within a very short space of time and was such a good person to work with. We’re all very proud of our partnership with The Stroke Association – it’s high quality work that has a real positive impact on wellbeing, and me, Chris, Carl and the rest of the WoW team. We’ll settle for that. 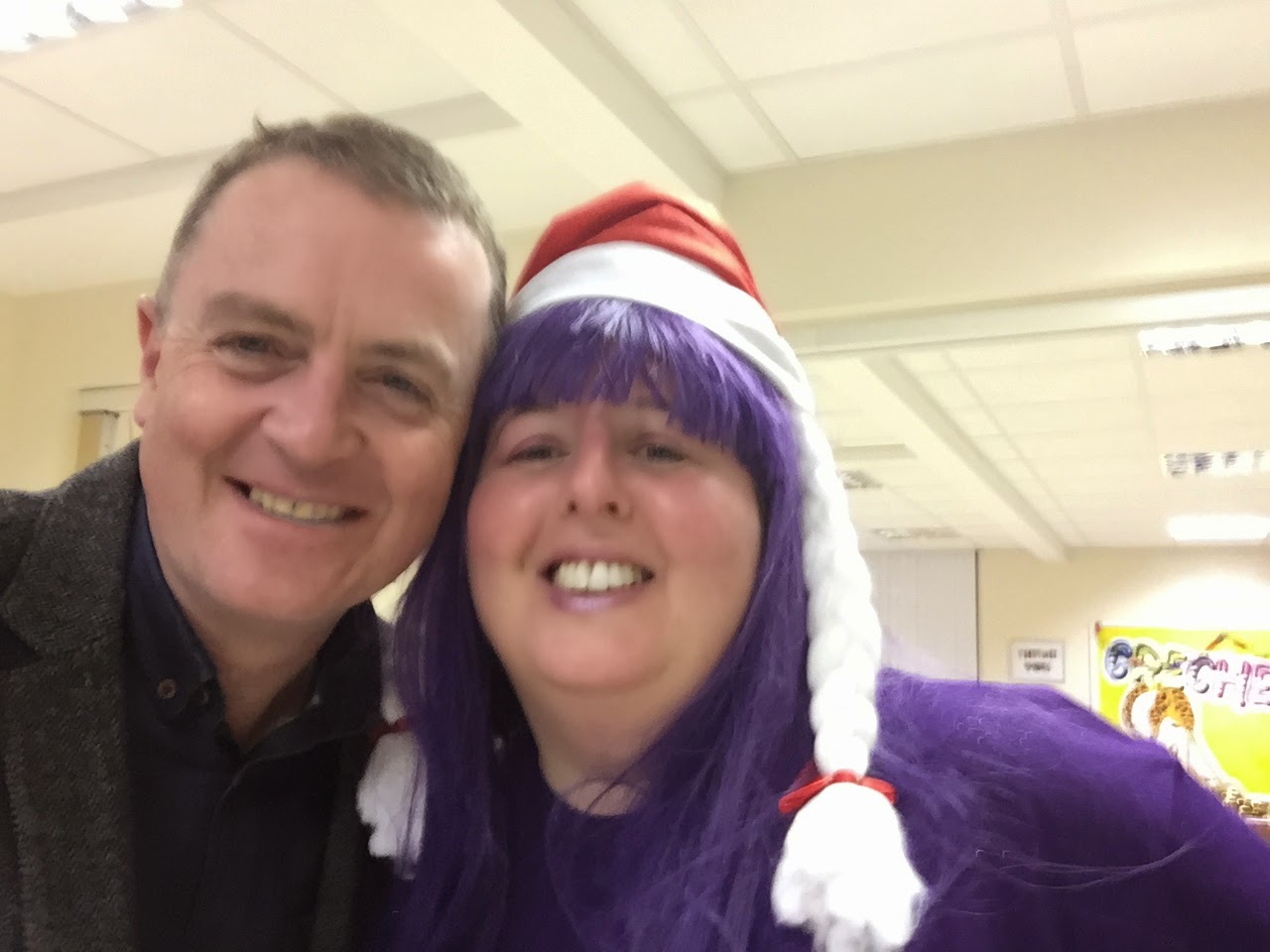